I use SoundCloud because their little visual music players are rad as hell. They are easily embeddable anywhere. Their interface is well-designed and fun to use. With a free account you only get so much space to upload music (unlike my own host), but there’s a community worth contributing to so I try to put my best tracks there.

Unfortunately, I don’t spend much time there listening to people’s stuff and commenting on things, much like the rest of the Internet. Fortunately, others have done me a service and listened and downloaded (and even commented a few times) on the tracks I’ve uploaded. Check out my overall stats: 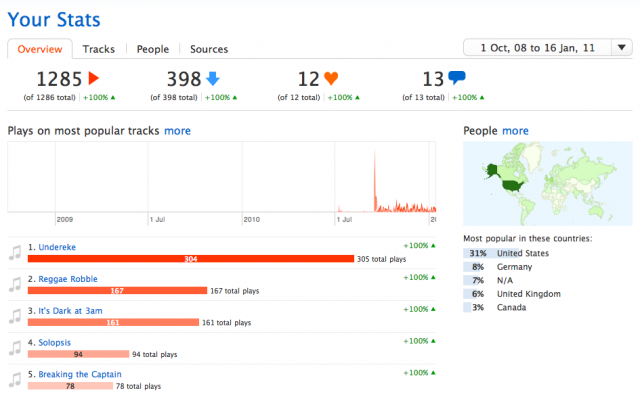 I’ve posted a few of these on Reddit, most likely spearheading the traffic seen here. I started linking things right about where the graph goes from 0 on the y-axis to the top of that massive spike. Still, though…Undereke has over 300 plays? Whoa. It’s long and guitar riff-heavy, so I didn’t think it would appeal as much. It must just be the unusual name, prompting a click to find out what the hell something called that would sound like.